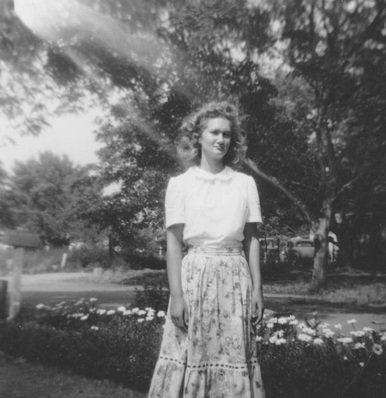 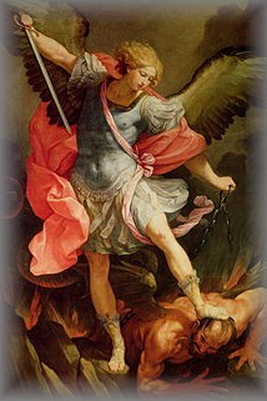 St. Michael the Archangel battling the devil.
The Battle

As Christian’s we believe that there is indeed a devil and that there is a relentless battle between good and evil happening in the world.  We mere humans cannot see the thin veil that lies between us and the spiritual realm, however we must know that ultimately the devil’s greatest desire is our souls. The devil is so very good at what he does and one way to bring a soul into great despair and loss of faith is to have someone, especially a woman, lose all of her dignity and self-worth through promiscuity.﻿﻿﻿

As we will see chronicled in her diary, the battle for Vilma’s innocence was waging… and she was well aware of it. Aware of it to the extent that when she did wrong her conscience ate at her, yes that typical Catholic guilt and the sense of wrong doing always set in. However, not all guilt is bad! Guilt is that inner sense that we all have telling us that something is not quite right with what we are doing. Guilt therefore can be a catalyst for change in the right direction, but only if we heed that inner calling.

It’s true that Vilma was surely no Saint, her weak human nature got the better of her over and over again. Not only was she battling the physical side of resisting young raging hormonal impulses, it was a spiritual battle as well. However, her religious upbringing gave her the grace of a well-formed conscience, of knowing the difference from right and wrong. Vilma knew who she was as a Christian, there was never a need to go out and ‘find herself’ either. She was confident in her belief that she was a dignified child of God and lived her life with the surety of his love and mercy.

Vilma always tried her best to follow His path. So when she felt that telltale guilty tug on her conscience, without hesitation she knew she had to make things right with God.  When she failed and fell hard, which we will ALL do in our lives due to our human nature, she humbled herself before the Lord and always knew where to turn: The Confessional. 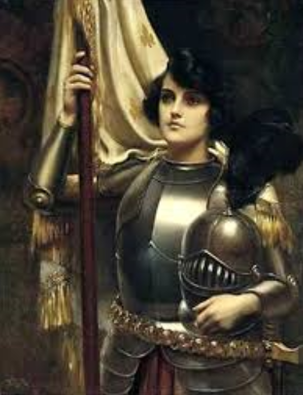 Confession as well as receiving Holy Communion on a regular basis played a vital role in Vilma’s young life. All of the Seven Sacraments of the Church are vessels of grace that God has set aside and wants to pour into us freely. They are the tangible elements in our human lives that connect us to the invisible God.

As Catholics, these two of the Seven Sacraments can be received on a regular basis and are considered our spiritual strength for the long journey of life. It is our armor and weapons, if you will, in the battle for our souls.

Reading through my mother’s diaries, I sometimes envision my mother as a young Super Hero for Christ, making mistakes along the way, but still able to put on the armor of God through the Sacraments to battle the devil’s assault on her purity. Being the guardian and protector of her body, she lives through another battle to tell the tale of saving her chastity, she then laughs in the face of the devil and proclaims: “I am Vilma The Unconquerable!”

The Nature of Man and Woman

No matter what generation we are in, most men were and are the same. After being wined and dined, which may include a little smooching and the customary male/female flirtations, the man expects something more: to conquer the girl. Depending on the girl, even in the 1950’s, many men were successful in their endeavors.

Men were naturally attracted to Vilma’s innocence, her dates often told her they admired her and wanted to marry a girl just like her…a girl who refused to compromise her virginity until she was married. But she knew that in order to marry the man of her dreams, the man would have to be worthy of her. A man who would wait for her, love her for who she was and not for the pleasure she would provide to HIM to satisfy momentary desires. He would be a protector of her heart, body and soul, and he would be a man who would strive to be a better man because of her example. 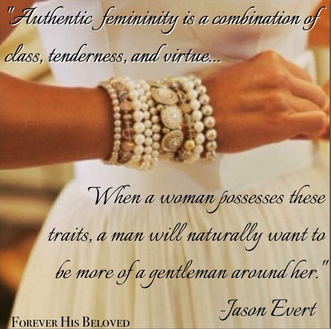 One famous television personality in the 1950’s was the Archbishop Fulton J. Sheen. His thought provoking series “Life is Worth Living” was full of wisdom, humor and deep theology. His show was on air for more than 10 years, at one point it was the highest rated show of the era. Certainly his teaching was true and gives us a deeper take on the value and dignity of women:

Take a moment to breathe in the beauty of that quotation. Here Archbishop Sheen is talking about the feminine genius God designed and its literal effect in the world. What Archbishop Sheen is saying in a nutshell is that it is the woman who teaches man morality. If young girls and women can appreciate that in order to find the man of their dreams, they must hold themselves to a higher standard. God challenges all of us to live a life of virtue, it is here where true peace and happiness lies. To an extent, although very imperfectly, Vilma was trying to live that quote. 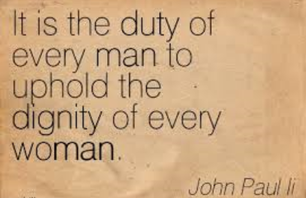 Theology of the Body

Pope John Paul II, recently canonized “Pope Saint John Paul the Great”, during his 27 year papacy also taught of the deep spiritual relationship between male and female in his works called Theology of the Body.

Theologian Christopher West sums up below the true meaning of the human person and uncovers why chastity is a soothing balm for many of the problems we face today:

"The Pope's life-transforming message of hope counteracts typical societal trends which urge us to view the body as an object of pleasure or as a machine for manipulation. John Paul II portrays a beautiful vision of sexuality in his Theology of the Body and other earlier works including Love and Responsibility. He inspires a true reverence for the gift of our sexuality and challenges us to live it in a way worthy of our great dignity as human persons."

As we begin reading the first of the diaries, my intent is to weave in many of the thoughts of Archbishop Fulton Sheen and Pope John Paul II throughout the rest of this blog in a series of smaller articles. Stay Tuned!